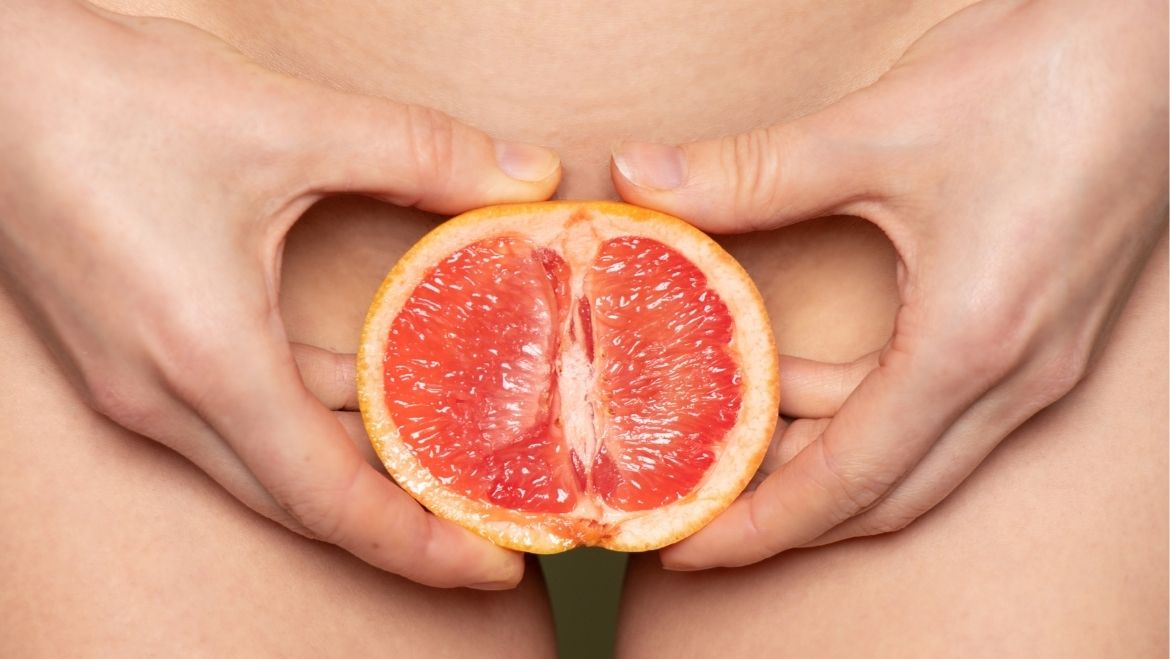 The V-word: What is going on down there? Introducing Vulva and Vagina

Most people use the word “vagina” to describe the whole genital area. It’s actually just part of the package. The vulva refers to the visible regions of the genital area: mons, clitoris, urethra, labia, etc. The vagina, on the other hand, is in the inside of the body. It’s a tube-like structure connecting the vulva with the cervix. The entrance to the vagina is visible, but the rest is hidden.

Understanding the anatomy of the vulva is crucial for your and/or your partner’s enjoyment (or for general knowledge!). So, here, in a nutshell, is what’s going on “down there.”

The clitoris is protected from the exterior by a movable piece of protective skin called the clitoral hood, which looks like an oval-shaped pea-sized nub but is considerably larger. It’s around 3-4 inches long and forms a wishbone shape on either side of the vulva. It’s the only part of the human body dedicated completely to pleasure.

The Labia and Mons

The mons and labia majora and minora (outer and inner lips) exist to enhance sexual pleasure and to protect the vestibule (vaginal opening). The mons is the fatty skin tissue from the pubic bone to the clitoral hood. The labia majora, built from hairy and fatty tissue, extends from the mons to just below the vestibule. The labia minora doesn’t have fat, but they do have erectile tissue, so they swell with sexual stimulation.

The Vestibule, Perineum and Anus

The perineum is the area between the vestibule and anus. We invite the anus to the vulva’s party as, even though it’s part of the gastrointestinal tract, it tends to be an organ enhancing sexual pleasure for many people.

The vagina is the tube-like structure that connects the vulva with the cervix; its length can vary significantly. The vagina tends to lubricate when it becomes sexually aroused and it can expand to double its size during arousal to facilitate penetration.

Many people enjoy having their vaginas stimulated or penetrated with a finger, a sex toy or penis. The first third of the vaginal canal is usually the most sensitive, whereas the second third tends to be less sensitive.

The cervix is the end of the vagina and acts as a doorway to the uterus inside the body. For some people, this is also a sexually enjoyable area, while for others it may not be pleasurable to touch.

How Many Holes Are There?

‍Vulvas and vaginas in transition

There are approximately 6.579 self-declared trans respondents in Europe and 1 to 1.4 million transgender women and men in the US. Sex can be assigned at birth or changed. Gender is a sense of who we are: female, male, both or neither. Transgender individuals may face some differences when it comes to their vulvas and vaginas, especially in regard to menstrual cycles, arousal response, etc. Please check our website for more articles and workshops dedicated to this broad topic

This website uses cookies to improve your experience while you navigate through the website. Out of these cookies, the cookies that are categorized as necessary are stored on your browser as they are essential for the working of basic functionalities of the website. We also use third-party cookies that help us analyze and understand how you use this website. These cookies will be stored in your browser only with your consent. You also have the option to opt-out of these cookies. But opting out of some of these cookies may have an effect on your browsing experience.
Necessary Always Enabled
Necessary cookies are absolutely essential for the website to function properly. This category only includes cookies that ensures basic functionalities and security features of the website. These cookies do not store any personal information.
Non-necessary
Any cookies that may not be particularly necessary for the website to function and is used specifically to collect user personal data via analytics, ads, other embedded contents are termed as non-necessary cookies. It is mandatory to procure user consent prior to running these cookies on your website.
SAVE & ACCEPT